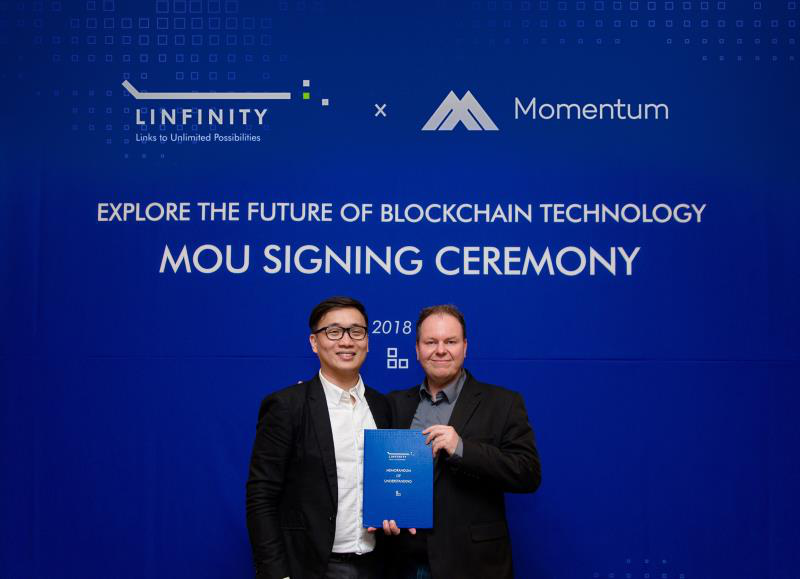 Momentum is a blockchain marketing platform created by MobileBridge in Switzerland. Its parent company, MobileBridge, is a multinational company with global influence, helping customers around the world, including Burger King, Dansk Supermarked, Praxis and Volkswagen, to better understand and interact with their customers. As its subsidiary company, Momentum is committed to building the world’s first automated marketing platform based on blockchain and cryptocurrency.

Through the Momentum platform, in addition to earning the membership points, users can also check company dynamics and access personal information. This new customer relationship management model will redefine the traditional membership points system. This cooperation will further integrate Linfinity’s commercial resources at the B-end and Momentum’s marketing advantages at the C-end to jointly promote the commercialization and popularization of blockchain industry and create a new ecosystem for millions of users.

Momentum Founder and President Eyal Oster said,“We are thrilled to cooperate with Linfinity as we see them as a great partner for blockchain and supply chain management. We believe that cooperation between strong teams can drive mass adoption and full utilization of the technology. We look forward to a great cooperation and are already eyeing the first mutual use cases.”

“The ultimate value of the emergence of any new technology is to benefit mankind, so that everyone can enjoy the happiness brought by technology,” said Anndy, CEO of Linfinity. “In the blockchain industry, we are constantly looking for more industry partners to promote the development of the entire industry, and cooperation with Momentum is a good start.”

This cooperation will further integrate Momentum’s cooperative resources in Europe and Linfinity’s market advantage in Asia-Pacific region, and will establish a token exchange mechanism between Linfinity and Momentum. In the future, LFT will be able to be redeemed with membership points on the Momentum platform to further expand the circulation area of LFT and its token value, as well as promote Linfinity’s development in European and American markets.

Linfinity has signed strategic cooperation agreements with several international companies in Taiwan and Singapore, including Alishan Group and Scientific Tradition, aiming to build a reliable and traceable anti-counterfeit supply chain solution underlying blockchain technology. At the same time, by combining LFT Token to the business ecosystem, Linfinity is developing more benefit-distribution models under the new safe and credible cooperation. All ecosystem participants, including suppliers, manufacturers, logistics service providers, retailers and consumers can benefit from it. “Blockchain is still a relatively new concept for some people, but there is no doubt that consumers are the real beneficiaries and promoters of it. ” Anndy added. This strategic cooperation is an important milestone in the transformation of blockchain technology from concept to reality and will greatly promote the commercialization of blockchain industry.

Momentum protocol (Zug, Switzerland) is set to revolutionize the customer loyalty and rewards market by setting a worldwide standard blockchain protocol used by companies and brands to issue and control their own privately branded loyalty and rewards program stable tokens on the blockchain. The Momentum protocol offers instant exchangeability and liquidity between all tokens at the protocol level so as to give the highest value to the brands and their end consumers. The protocol offers connectors to a loyalty and marketing application middleware plus a 3rd party plugin eco-system and a full API stack. The team consists of Ariel Luedi (Chairman, Zug, fmr. CEO of Hybrid, SAP board member), Eyal Oster (President, Tel Aviv, Israel, Shlomo, Kees de Vos (Tel-Aviv, GM Intel, Netherlands)), Professor Youngsook Park (Korean Chair, UN Millennium Project, Global Blockchain Association).

READ  Erie News Now: Learning Through Reflection: "The Future of Blockchain is in Our Hands"