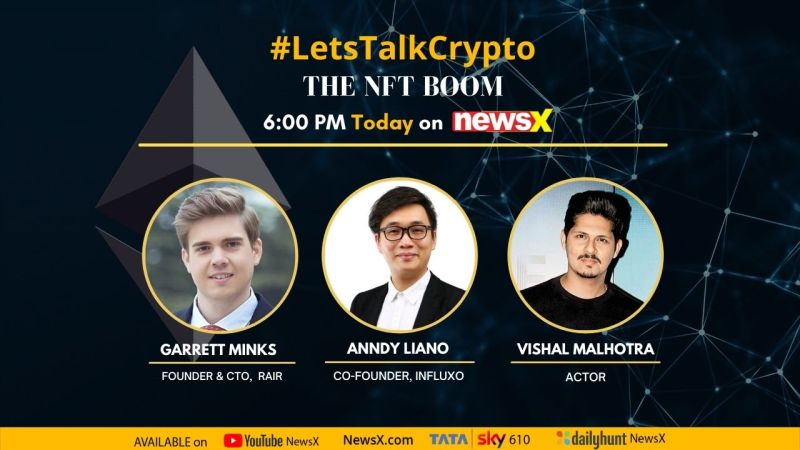 NewsX’s #LetsTalkCrypto Series talked about The NFT Boom. A non-fungible token is a unique and non-interchangeable unit of data stored on a digital ledger. NFTs can be used to represent easily-reproducible items such as photos, videos, audio, and other types of digital files as unique items, and use blockchain technology to establish a verified and public proof of ownership.

The following were the guest for the segment:

Vishal Malhotra, Actor said: “The utility is a big part of his NFT. It can be basically tokenized into a ticket which allows you to seat with me during the premiere of my next film. But my main intention is to create value for somebody who collects my NFT. I feel NFT is here to stay in a very big way especially in India.”

He is the first Indian actor to collaborate with an artist to do so. The art is a depiction of Vishal’s 25 years in Bollywood and the most popular characters he has portrayed over these years. The NFT was sold for 2.5 ETH.

Anndy Lian, Chairman of BigONE Exchange and Founding member of INFLUXO added: “NFT can be part of a purchase experience. In the past, if you purchase an artwork you can only show your friend at your house. But now with NFT digital artwork, you can show them the exact piece on your own metaverse.”

READ  Success is liking yourself, liking what you do, and liking how you do it. Maya Angelou

Ever since its acquisition by the ITV Network, the channel has witnessed unprecedented growth.

NewsX is the News Leader and sets the news agenda for the nation, with its crisp formats, straight forward reporting, pointed debates, trending hashtags, and engaging mix of stories.

The live segment can be found on www.newsx.com.