An affiliate of the world’s largest cryptocurrency exchange had just withdrawn its application to run a bourse in Singapore. Zhao, the richest person in cryptocurrency with a fortune of about US$90 billion, took to Twitter to say the affiliate’s investment in another exchange — one that was regulated — made the application “somewhat redundant.”

As it turns out, the other exchange has a licence to trade some things — such as shares in private companies and tokenized assets — but not cryptocurrencies. More importantly, the real reason for the withdrawal was that Binance’s affiliate didn’t meet Singapore’s criteria for protecting against money laundering and terrorist financing, a person familiar with the matter said after it happened last month. Binance denies this, saying it pulled the application on strategic and commercial grounds.

Binance is just the biggest player among scores of companies welcomed and then disillusioned by Singapore’s two-pronged approach to crypto policy. On one hand, the city-state embraces the technologies of cryptocurrency and has launched a framework for regulating the industry when other countries such as China have opted for outright bans. On the other, it doesn’t want its people getting burned by speculation, is wary of the criminal risks and is extremely picky about who it lets in.

“There is a very clear line drawn in the sand,” said Lena Ng, a partner at Clifford Chance who advises cryptocurrency players in Singapore and internationally.

The cryptocurrency industry is attracting the attention of regulators around the world, with US Securities and Exchange Commission Chair Gary Gensler labelling it the “Wild West” and saying it needs more oversight. The Singapore example shows the regulatory process won’t always be easy for the companies involved, even as states express openness to the concepts and technologies.

Ravi Menon, the managing director of the Monetary Authority of Singapore, the central bank and financial regulator, laid out Singapore’s approach in an interview with Bloomberg in October. The city-state sees promise in areas such as decentralisation, smart contracts and encryption, and wants to be well-positioned if they become integral to our economies, he said. But there are also “serious risks,” he said, giving the examples of money laundering and terrorist financing.

Singapore’s Payment Services Act came into effect in January 2020, providing a framework for regulating areas from trading Bitcoin to using tokens for payments. Under the law, MAS hands out so called digital payment token licences to crypto companies that make it through the application process.

The act’s introduction helped accelerate an inflow of crypto players into the Southeast Asian city.

Crypto.com, the world’s fourth-largest cryptocurrency bourse, relocated its headquarters from Hong Kong in 2021 and is seeking a licence. An affiliate of Huobi Group, which operated China’s biggest crypto exchange before last year’s blanket ban, is also applying, and its co-founder Du Jun has spent the last two years in Singapore. Binance’s Zhao, for that matter, had also been based in the city-state for the past two years.

All told, some 170 firms applied, including Coinbase Global Inc, the exchange that went public in the US last year in a landmark moment for the crypto industry. Gemini Trust, the bourse founded by Tyler and Cameron Winklevoss, is also among the applicants. Companies that have put in an application are allowed to operate in the city under a grace period until the regulator says otherwise or they drop out.

But about 100 applicants have already withdrawn or been rejected. Most failed to meet Singapore’s criteria for preventing illicit flows of funds, a person familiar with the matter has said.

In fact, only four are known to have received their licences, including Independent Reserve, an Australian cryptocurrency exchange, and the brokerage unit of DBS Group Holdings Ltd, Singapore’s largest bank. One other company, local startup Coinhako, said it had received in-principle approval.

“We don’t need 160 of them to set up shop here,” Menon said in the October interview. “Half of them can do so, but with very high standards.” 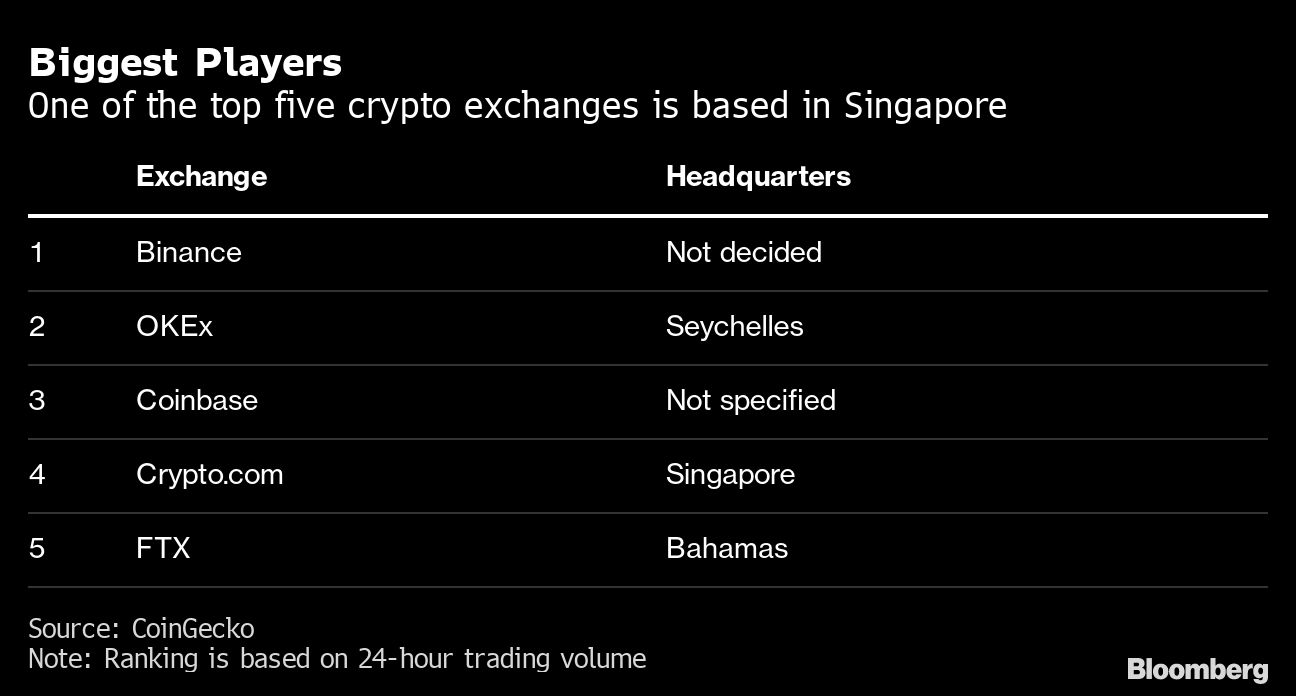 Singapore is taking a middle ground between the extremes of China, which banned all crypto transactions in September and vowed to stop illegal crypto mining, and El Salvador, which adopted Bitcoin as legal tender that same month.

It’s an approach that has similarities with other Asian financial centres.

Hong Kong, Singapore’s main rival as the region’s leading financial hub, uses a so-called “opt-in” regulatory regime for crypto exchanges, meaning they can apply to be regulated. It has approved one firm. The authorities are in the process of passing laws to enable a new licensing regime.

Japan had recognized 15 companies as cryptocurrency exchange operators as early as 2017, making it one of the pioneers of crypto regulation. As of December, it had given licences to 30 such firms.

South Korea had accepted registrations by 24 crypto-trading exchanges to operate in the country as of Dec 23. Only four of them are allowed to provide trading services in Korean won.

Singapore has advantages for becoming a crypto hub in its low-tax regime and lack of a levy on capital gains, according to Ulisse Dellorto, the Asia-Pacific head of blockchain analytics firm Chainalysis. The city-state also has an edge in ease of doing business, robust infrastructure and connectivity, and the fact that it’s already a financial center, said Gerald Goh, co-founder and Singapore CEO of Sygnum, which runs a digital-asset bank in Switzerland and an asset manager in the Asian city.

Some 350 firms focusing on blockchain and cryptocurrency already operate on the island, according to Chia Hock Lai, co-chairman of the Blockchain Association Singapore, which promotes blockchain technology. That translates into about 3,500 jobs, based on a median staff size of 10, he said.

But the case of Binance, which generated at least US$20 billion of revenue last year according to a Bloomberg analysis, suggests expanding at all costs isn’t necessarily the priority.

There were already signs the writing was on the wall for Zhao’s firm in September, when Singapore’s regulator added Binance.com, the group’s main platform, to its Investor Alert List of unregulated entities that may have been wrongly perceived as licensed or regulated by MAS. It told Binance Holdings to stop offering services regulated in the city-state, allowing only the Singapore entity to serve local residents.

Then in December, almost two years after it applied, Binance withdrew from the process.

“This certainly won’t damage Singapore’s reputation as a crypto hub,” said Neal Cross, a financial-technology entrepreneur and former chief innovation officer of the bank DBS. “In fairness, it may enhance it. Crypto is still nascent and has a long way to go before it becomes a major player in our wealth portfolios, but to make that happen, it needs to happen in a place that is firm but fair.”

A spokesperson for Binance said it’s continuing to work closely with partners and government agencies in Singapore to support the growth of blockchain and cryptocurrency initiatives in the country.

Cross said openness to crypto will yield benefits because blockchain and decentralised finance are likely to make up a large part of the financial services industry in the future. Asked about potential downsides, he said there are two.

“One is the failure of such exchanges” and “the losses incurred by mom and pop investors as these aren’t government-guaranteed”, he said. “Secondly, crypto is notoriously hard to track and hence can open up new pathways to money laundering, but I feel MAS are on top of this with their current regulation.”

“MAS frowns on cryptocurrencies or tokens as an investment asset for retail investors,” he said in a December speech. Cryptocurrency prices “are not anchored on any economic fundamentals and are subject to sharp speculative swings. Investors in these tokens are at risk of suffering significant losses.”

Bitcoin, the largest cryptocurrency, more than doubled from the start of 2021 through a high in November before tumbling for the rest of the year. In 2018, it plunged 74%. The digital token slid less than 0.1% on Wednesday to trade at US$42,649.75. 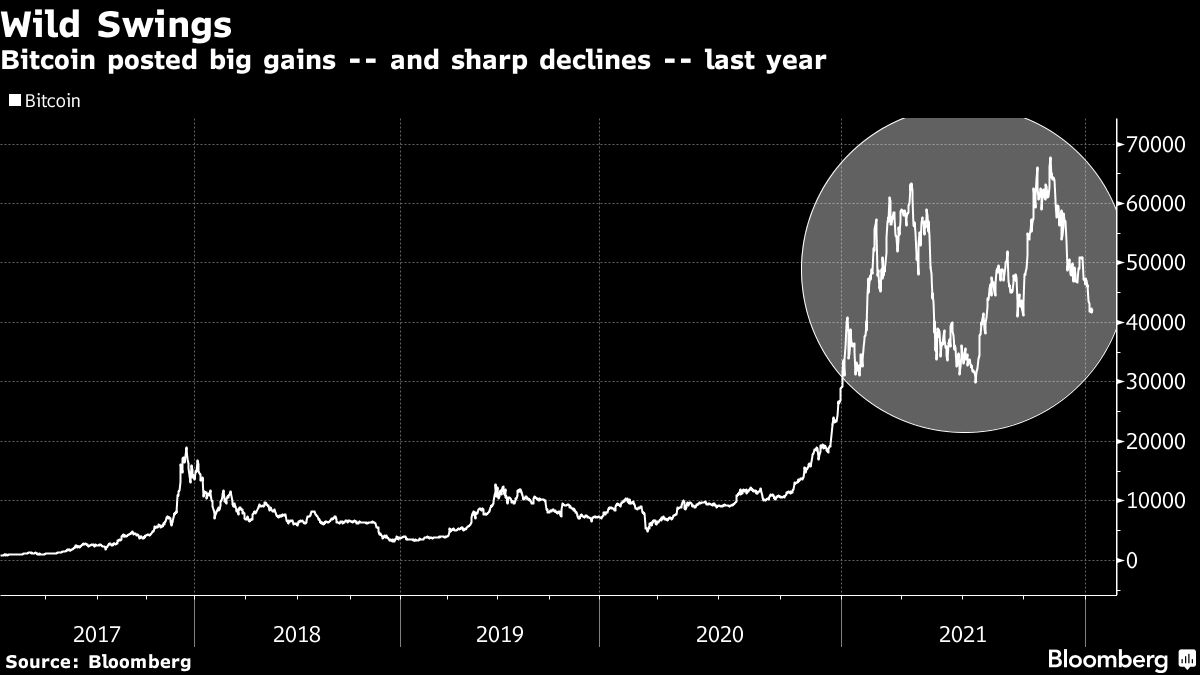 READ  Cryptos Cross $1 Trillion In Market Cap: Is The Bull Run On?

Singapore’s desire to protect its public from crypto trading has echoes in its policy for its two casinos, which have been a big economic success but came with concerns its people would be affected by gambling. In response, the government charges a S$150 (US$111) daily entry fee for citizens and permanent residents, while foreigners get in for free.

To be sure, not everyone is positive about Singapore’s crypto strategy.

“When Binance left, it became a statement that Singapore doesn’t welcome the big boys,” said Anndy Lian, the chairman of cryptocurrency bourse BigONE Exchange. “Many people are going for Dubai, because they see Singapore as not welcoming, and don’t know the real reasons behind that.”

Binance itself has turned to the Middle East, signing a cooperation agreement with the Dubai World Trade Centre Authority last month on the emirate’s planned virtual asset ecosystem. It also got in-principle approval from Bahrain’s central bank to be a crypto-asset service provider in the kingdom. And it appointed Richard Teng, a high-profile hire who joined Binance’s Singapore affiliate as its CEO in August, as the global entity’s head of the Middle East and North Africa.

Meanwhile, back in Singapore, a billboard for Crypto.com shouted its message in bold at a busy crossing on the Orchard Road shopping belt. “Fortune favours the brave,” it declared.

That may be true, or it may also favour the cautious. For Huobi Singapore CEO Edward Chen, the key is to get the mix just right.

“It is important to find the right balance between regulation and mitigating risks while still maintaining a competitive edge,” Chen said.