BITI is designed to give investors a way to profit from declines in the price of Bitcoin. It is the first U.S. fund of its kind. On hearing this before the launch, I know many naysayers were piling into this ETF to short Bitcoin. This also resulted that this vehicle is now the second-largest bitcoin-themed ETF (behind BITO) in the U.S. market with just a few days of trading.

The challenge with a short ETF is timing the market. At this moment of time, I think this ETF started off slower than expected as Bitcoin started climbing back to over $21,000. If they were to be launched in November when Bitcoin hits its all-time high at $69,000, then perhaps you will see more influx of investors jumping in.

Analysts also told me that if investors also bought into BITO and BITI, and if you time right to follow the market’s momentum, you will still be a winner. I agree and disagree with this strategy as timing is the key factor to this.

I have always thought that a spot-based Bitcoin ETF product will be launched first. By seeing another derivatives products launched before the spot-based product, this reinforces my thinking further. I think the regulators are worried about subscriptions of the spot product because they know it will be popular. That is why they approved futures-based ETF, thinking that most risk-conscious investors are unlikely to buy the futures-products. Well, based on the trading figures, I still think the demand is there and it is rising.

Will history repeat itself? Only time will tell.

Short Bitcoin ETF: Is BITI a good hedge against the crypto winter?

ProShares has launched another bitcoin-linked exchange-traded fund (ETF). This new instrument is shorting the coin amid the wider cryptocurrency bear market.

The ETF issuer previously launched a bitcoin futures ETF BITO when the cryptocurrency was enjoying record highs and risk-on sentiment was prevailing.

Both funds trade futures contracts on the Chicago Mercantile Exchange (CME). The difference is only between their short and long positions.

What is a short bitcoin ETF, and what is the long-term sentiment on its performance?

What is ProShares bitcoin ETF?

An exchange-traded fund (ETF) is a basket of securities that tracks an underlying index or instrument, if it’s passive, or it could be actively managed with fund managers picking stocks based on their analysis and financial modelling. ETF prices fluctuate throughout a trading session as they are sold and bought on an exchange.

ETFs typically contain bonds and stocks but more recently have ventured into cryptocurrency territory. Cryptocurrency ETFs were highly anticipated by the community as they aim to boost liquidity and the adoption of digital assets in the world of investing.

In order for an ETF to be established, the company willing to create a fund must file a proposal with the US Securities and Exchange Commission (SEC).

A bitcoin ETF is made up of bitcoin or instruments linked to its price. How does it work?

In theory, bitcoin tokens would have been purchased by the company that owns the fund, securitised and sold or traded on an exchange. But, the SEC is yet to accept such a proposal. The underlying assets in bitcoin ETFs are linked to bitcoin futures contracts traded on the CME.

Similarly to BITO, the ProShares Short Bitcoin Strategy ETF, BITI, trades in futures contracts on the CME. The difference is that BITI is a short bitcoin ETF, meaning that it trades short positions. BITI allows investors to profit from the falling price of the cryptocurrency, which could be used as a part of a hedging strategy.

“BITI affords investors who believe that the price of bitcoin will drop with an opportunity to potentially profit or to hedge their cryptocurrency holdings. BITI enables investors to conveniently obtain short exposure to bitcoin through buying an ETF in a traditional brokerage account,”  ProShares CEO Michael L. Sapir said in a statement on 20 June 2022.

The fund tracks the nearest maturing monthly bitcoin futures contract trading on CME and is a rolling index, meaning that the index operates in accordance with a set of predetermined rolling methodology. In BITI’s case, the roll occurs over a five-day period every month, effective prior to the opening of trading and preceding the last trading date of the futures contract.

The last trading date for bitcoin futures contracts is the last Friday of the contract month. The index rolls monthly and distributes the weights 20% each day over a five-day roll period.

Are you wondering how to buy short bitcoin ETF? As ETFs are bought and sold on an exchange, bitcoin ETFs can be purchased via online brokers and most trading platforms.

For those investors who prefer to put their money in a mutual fund, which trades only once a day,  ProShares’ affiliate mutual fund company launched a Short Bitcoin Strategy ProFund (BITIX), which has the same investment objective as BITI.

“With the additions of BITI and BITIX, ProShares and ProFunds will be the only fund families in the US offering funds that allow investors to express their view on the direction of bitcoin—no matter whether they believe the price will go up or down,” Sapir noted.

The introduction of the new short bitcoin ETF had “many naysayers were piling into [it] to short bitcoin”, said Anndy Lian, best-selling author of Blockchain Revolution 2030 and chief digital advisor to the Mongolian Productivity Organisation.

What is your sentiment on BTC/USD?

“This also resulted that this vehicle is now the second largest bitcoin themed ETF (behind BITO) in the US market with just a few days of trading.”

According to Lars Seier Christense, chairman of the Concordium Foundation and founder of Saxo Bank, “such reversed price-action investment products are well known in the traditional finance sector, and are typically used for hedging.

“Typically, they cater for investors in markets where shorting is difficult, or where they would not have a relationship with their brokers allowing them to short or where margins of such short positions are very high,” he added.
“I believe such a vehicle could become quite popular for hedging and shorting purposes, being easier to invest in than outright shorts.”

However, Lian also highlighted that the key challenge when trading short ETFs is timing the market. He told Capital.com:

“At this moment in time, I think this ETF started off slower than expected as bitcoin started climbing back to over $21,000. If they were to be launched in November when Bitcoin hit its all-time high at $69,000, then perhaps you will see more influx of investors jumping in [now, as the token has been going down].”

Dan Hoover, Director at Castle Funds,  explained that the futures market in which BITI trades uses CME-listed futures, which close for an hour a day Monday through Thursday, and on Friday until Sunday (Chicago time). BTC can be bought and sold 24/7.

“This delay can create some unexpected price action in the futures as the prices ‘catch up’ to market news in Asia, especially over the US weekend. Additionally, BITI only trades on US trading days, which is even narrower than CME futures trading (9:30AM – 4PM NY time, M-F, observing most major holidays),” Hoover added.

Other competitors are spot or physically-backed bitcoin ETF projects. But, they have been pending SEC approval for a few years now.

“These ETF’s could be used to replicate the BITI strategy much more efficiently, as they avoid the compounding risks of the inverse ETF and the carrying costs of the underlying futures,” Hoover noted. 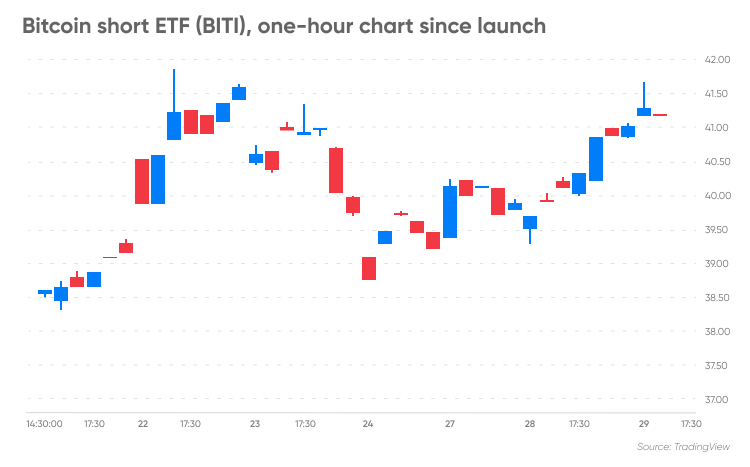 Analysts appear to have mixed feelings on how the short bitcoin ETF will perform, as it was launched at such an uncertain time for cryptocurrencies and BTC.

In a note published on 21 June, Laith Khalaf, head of investment analysis at AJ Bell, noted that “bitcoin isn’t behaving particularly unusually and losses of this magnitude are to be expected, especially after periods of equally extreme price appreciation.”

According to Khalaf, this is not the coin’s worst performance and BTC has suffered worse “crypto winters before and come back to have its day in the sun”.

“The popularity of short BTC ETF’s, such as this latest iteration from ProShares, highlights quite how bearish a run the cryptocurrency market has been on. Short ETFs are suddenly popping up more often, as Bitcoin struggles to find a bid,” Invezz’s data analyst Dan Ashmore told Capital.com.

Long-term, Ashmore is bullish on bitcoin, however, in the short and medium-term, the ETF could perform well as the US Federal Reserve is still struggling to tackle rising inflation and a tight geopolitical situation, according to the analyst.

Saxo Bank’s Christensen agreed with Ashmore, noting that the ETF could be interesting for short-term trading.

“Unless the BTC community is completely wrong about higher levels for BTC longer-term, it would clearly not have a great investment in its own right, but more suited for short-term speculation and hedging of crypto portfolios,” he added.

Note that analysts’ predictions can be wrong. Forecasts shouldn’t be used as substitutes for your own research. Always conduct your own diligence, and remember that your decision to trade or invest should depend on your risk tolerance, expertise in the market, portfolio size and goals.

Keep in mind that past performance doesn’t guarantee future returns. And never invest or trade money you cannot afford to lose.