Solana’s SOL has been seeing a surge in investor interest as it continues to expand its network with more exciting projects coming up. Despite dipping by 87.8% since its all-time high in November 2021, experts are saying that a rebound is near while bitcoin (BTC) is down by around 70% since November 2021 gains.

How do the two coins trade against each other and what does the SOL to BTC forecast suggest amid a bear market? Let’s take a look at the SOL/BTC pair and some of the factors that may shape its exchange rate.

SOL/BTC is the exchange rate between SOL, the native cryptocurrency of the Solana blockchain platform, and BTC, the native token of the Bitcoin Network.

Bitcoin was first mined in 2009 by its creator or group of creators who prefer to keep their identity a secret using the pseudonym Satoshi Nakamoto. It is also the first ever platform to use a blockchain to build, exchange, store and distribute the digital coin.

The cryptocurrency is used as a peer-to-peer payments method, and over the last 10 years it has also become an investment vehicle.

Bitcoin uses a Proof-of-Work (PoW) consensus mechanism. The cryptocurrency is given as a reward to miners who solve mathematical equations to prove the legitimacy of BTC transactions.

The maximum number of newly mined bitcoins is limited at 21 million. After every 210,000 mined BTC blocks (this takes around four years), the blockchain experiences a halving event, which cuts the number of BTC coins in circulation by half.

Solana is a public, open-source blockchain that hosts a number of projects in the likes of decentralised finance (DeFi) applications, non-fungible tokens (NFTs) and Web3.

It prides itself in its low transaction costs (at less than $0.01), fast speed (at 400 milliseconds per block) and security (it is censorship resistant). The blockchain was nicknamed the ‘Ethereum killer’, as it aims to improve what the Ethereum blockchain is lacking.

It was founded in 2017 by a former Qualcomm (QCOM) employee and Dropbox software engineer Anatoly Yakovenko and his colleague Greg Fitzgerald. In contrast to BTC, Solana uses a Proof of History (PoH) consensus mechanism for verifying transactions on the blockchain, which uses an alternative method for calculating time.

SOL coins are ERC-20 standard, meaning that they were developed on the Ethereum (ETH) network and are primarily used for interacting on the blockchain.

Since SOL’s launch in 2020, the SOL to BTC rate struggled to pick up momentum, moving sideways for around 10 months before starting to gain speed at the end of February 2021. 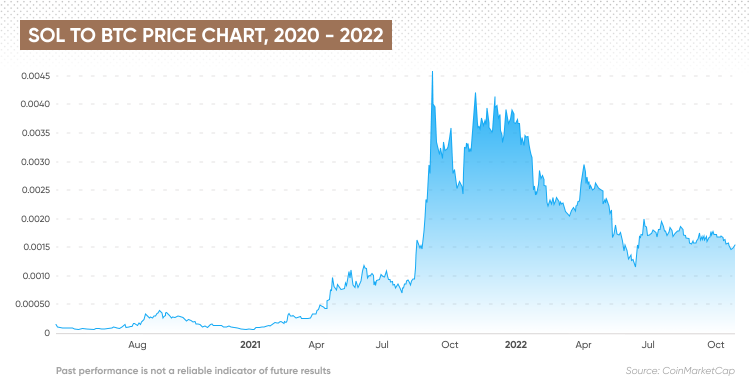 Between 15 August 2021 and 9 September 2021, however, the SOL/BTC pair surged, rising by more than 385%, up from 0.0009374BTC to 0.004576BTC as Solana was being discovered by a number of celebrities, such as Mike Tyson and Jason Derulo. This was also the time when the SOL to BTC reached its all-time high, as seen on the price chart above. 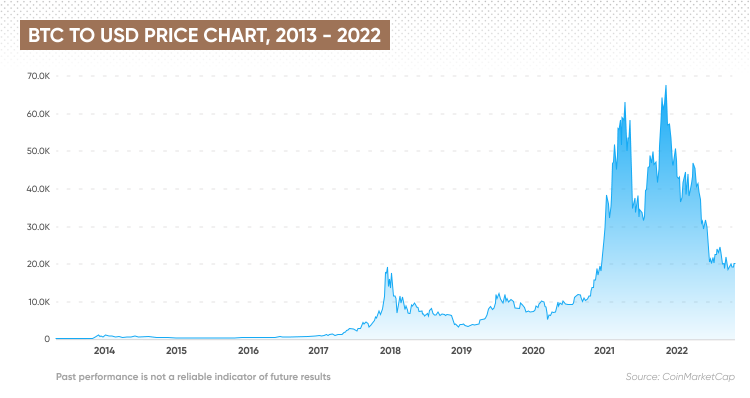 In line with other major cryptocurrencies, the SOL/BTC rate regained a big portion of its losses as it rose to 0.004202BTC by 7 November 2021, at the time when the SOL value in USD reached its all-time high of $258.78. 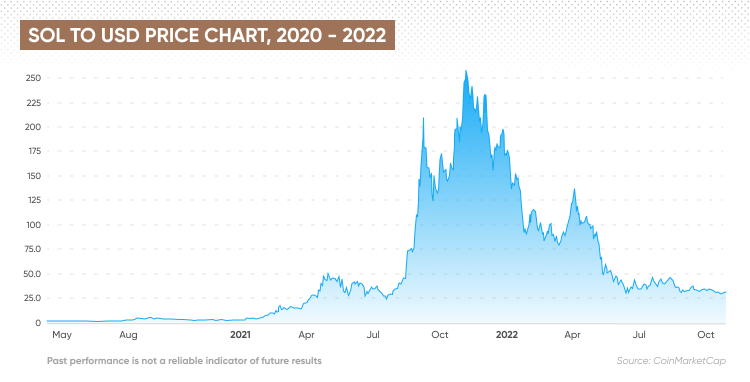 In terms of technical analysis, the chief digital advisor at the Mongolian Productivity Organisation and author of NFT: From Zero to Hero, Anndy Lian, told Capital.com that the SOL price could be headed towards a trend reversal, as of 28 October.

“The Relative Strength Index (RSI) indicates that the token is in the overbought zone, signalling a reversal could be on the way,” he said.

“Solana has experienced several recent network outages and failures. In the beginning of June, validators in the network stopped processing new blocks for several hours and apps built on Solana’s blockchain were taken offline, which sent its price down more than 12%.”

Projects built on Solana have potential to affect the token’s future price. On 27 October, the Web3 platforms built on Solana Decentralised Engineering Corporation (DEC) and Teleport announced that they have raised funding to bring a Web3 Uber rival (TRIP) to the Solana blockchain, something Ethereum co-creator Vitalik Buterin theorised a while back.

Lian noted that bringing the ridesharing industry to the Solana ecosystem “would surely put SOL into a high utility mode”.

In addition, Solana had partnered with artist Nancy Baker Cahill. She launched her first NFT collection on the blockchain that was shown across 90 billboards on Times Square. Metaplex, an NFT ecosystem built on Solana, also announced it was bringing a new asset class that will allow “creators to enforce royalties at the protocol level by extending the Token Metadata program, which powers 99%+ of all NFTs on Solana.”

Dr. Lekhi noted that until Solana network’s upgrade, “stability will remain a major concern for the SOL, adding:

“It is expected that the Mainnet version will stop the power outage issue. The SOL market had set higher benchmarks for its prices, along with developments in decentralised exchanges, Solana NFT marketplace, Yield aggregators and online games.”

The date for the upgrade launch is yet to be announced.

The enthusiasm surrounding Solana also comes following the news about Saga, its flagship Android phone, which will start shipping in 2023, Lian noted. Solana announced that Saga will have its first mint event on 28 October, which will only be available to those who pre-ordered the phone.

Based on the analysis of past performance, as of 28 October, algorithm-based forecasting service Wallet Investor predicted that SOL/USD could fall to $2.947 in 2023. The platform did not provide a price prediction for 2027.

While Wallet Investor did not provide a direct SOL to BTC forecast, data suggested that the exchange rate could be 0.00012754BTC in 2023.

Dr. Lekhi noted that 2022 was not a good year for SOL, however, the coin may observe a steady growth in the coming months as a rebound in SOL’s price is anticipated.

Lian added that interest in SOL is “extremely high” which could mean that its future movement could be “overall positive”, adding that “with the strong ecosystem backing its value, the rebound can be promising.”

Remember that analysts’ and algorithm-based predictions can be wrong and shouldn’t be used as a substitute for your own research.

Always conduct your own due diligence on a cryptocurrency project before trading, looking at the latest news, a wide range of analyst commentary and technical analysis. Note that past performance does not guarantee future returns. And never trade money you cannot afford to lose.