Dubbed the ‘Ethereum killer’, Solana’s native cryptocurrency, SOL, saw its price grow almost tenfold last year. However in recent months, the token has been struggling to pick up speed, losing nearly 70% of its value by mid-March 2022.

A recent spike in major outages faced by the blockchain threw many investors off, with SOL’s price falling to $107.24 by 20 April 2022.

On 12 April 2022, Solana was listed on Robinhood, with high hopes of attracting new investors. Can it regain past highs, and what’s in store for the Solana (SOL/USD) forecast?

Unlike many other popular blockchains that operate using Proof-of-Work (PoW) or Proof-of-Stake (PoS) algorithms, Solana was the first to introduce a Proof-of-History (PoH) algorithm, which allows the blockchain to operate quickly while staying secure and decentralised.
Founded in 2017 by former Qualcomm employee and Dropbox software engineer Anatoly Yakovenko and his colleague Greg Fitzgerald, Solana’s main goal was to create an open-source project that implemented a new, high-performance permissionless blockchain.

Because of its PoH algorithm, Solana can process over 250,000 transactions a second , marking it as a competitor to Ethereum (ETH), the second highest cryptocurrency by market capitalisation, as of 20 April. Ethereum has become the leader in decentralised finance (DeFi) due to its compatibility with smart contracts, which enable the building of decentralised applications (dApps).

However, while Ethereum remains the second largest cryptocurrency, its popularity has also made the blockchain very expensive and slow to use, which allowed for the creation of Solana.

According to Solana’s official website, the platform is “the fastest blockchain in the world and the fastest growing ecosystem in crypto, with thousands of projects spanning DeFi, NFTs, Web3 and more”.

In addition to being fast, Solana is also cheap – average fees are less than $0.1 – and censorship-resistant, allowing the application to remain open and run freely.

Solana is powered by its native cryptocurrency, SOL, an ERC-20 token running on the Ethereum network. SOL is used to pay for transaction fees and any purchases in the Solana ecosystem and staking.

The total supply of SOL tokens exceeds 511m, with over 333m tokens currently in circulation, according to data provided by CoinMarketCap at the time of writing (20 April).

The SOL cryptocurrency has a market capitalisation of more than $35bn and is the 7th most popular token, above Dogecoin (DOGE), Terra (LUNA) and Shiba Inu (SHIB).

Will SOL coin price go up or down? Technical outlook

Since SOL’s launch in 2020, the coin has struggled to pick up any momentum moving sideways for around 10 months before starting to gain speed by the end of February 2021.
Between late February 2021 and mid-July 2021, the token battled values that dropped as low as $13 and did not exceed $56.

The SOL cryptocurrency reached an all-time high on 6 November 2021, hitting $258.93 – a 35.5% surge on its September 2021 value. The bullish trend was in line with other cryptocurrencies, including Ethereum (ETH), Bitcoin (BTC) and Binance (BNB).

Since then, however, the trend has reversed, with the SOL token price decreasing by 65%, down to $78.94 by 13 March 2022, amid broad negative market sentiment as tensions started to rise on the Russia-Ukraine border and the outbreak of the war.

A mini surge occurred in the following three weeks as the coin managed to win back 73.2% of its value, rising to $136.78, following the publication of Solana’s energy use report, which stated that the blockchain’s carbon footprint has greatly decreased since December 2021. 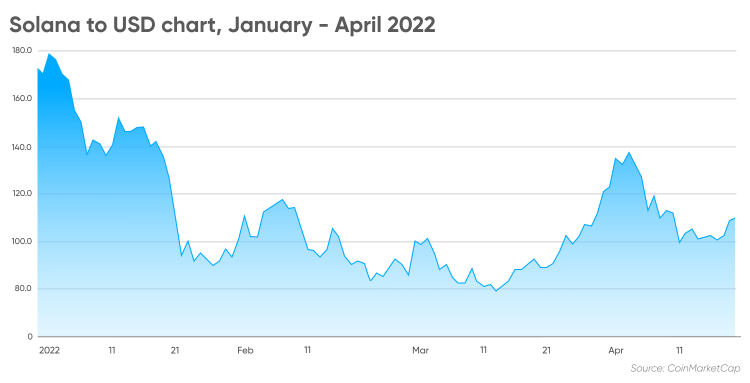 SOL token technical analysis provided by CoinCodex showed that short-term sentiment for the coin was pretty neutral at the time of writing (20 April), with 22 indicators pointing to ‘sell’ and 8 to ‘buy’.

A relative strength index (RSI) reading of 27 was in oversold territory. A reading of 30 or below would indicate that the asset is becoming undervalued and a trend reversal is likely to occur. The token is trading above its five-and 10-day moving averages, yet close to its R1 resistance level of $110.82.

Is Solana (SOL) a good investment?

Some of the biggest SOL coin news came as the platform announced a change in the leadership of its Solana Foundation Council on 18 April 2022. The council was established in 2020 with the aim of advancing the adoption of decentralised technologies as a public good. It’s been helping the Solana ecosystem develop.
On 29 March 2022, Solana launched Solana Pay, a “build your own online store” application on its blockchain. It allows users to create a storefront and accept low-fee, global payments directly into their wallets without the need for a bank or credit card.

Since launching, over 600 merchants have engaged with Solana Pay while others started incorporating the ecosystem into their payment flows, thus encouraging space for new investors to join the blockchain.

On 1 April 2022, the platform also announced that the Solana Hacker House World Tour will be making a comeback in new cities globally, including London, Tokyo and Barcelona, sparking international interest.

Additionally on 12 April 2022, Solana was listed on Robinhood, which, according to BigONE Exchange chair in Asia, Anndy Lian, is likely to boost SOL coin’s future price.

“An equally impressive partnership which has supported the bullish price… is the 12 April news from popular app Robinhood that it was listing SOL for the first time,” he said.

Lian told Capital.com that in addition to the listing, the price of the SOL coin to USD has been driven by debate sparked by Tesla (TSLA) CEO Elon Musk’s bid to buy Twitter (TWTR).

In the past, Solana has hinted at wanting to work with Musk, replying to his tweets on the social media platform.

In addition, Lian told Capital.com that FTX’s investment in its own NFT platform on Solana , as well as OpenSea’s beta version launch on the blockchain, could boost SOL coin’s future price.

“Set in the context of pressure on altcoins, the outlook for the token price could be modestly optimistic after a bearish beginning to 2022,” he told Capital.com.

“Recent partnerships news support this thesis, and it’s also supported by the ‘Social Solana Prices Estimates’ on CoinMarketCap; with over 5000 voting (median average) for a 17.75% increase in price to $121.49 by the end of April; and over 2000 voting for a $127.42 price level by the end of May.”

On the minus side, however, It’s important to note that the blockchain is prone to network outages. During March and April 2022, Solana suffered nine network outages, seven of which were determined as “major”.

“The two key risks are firstly, if the bottom falls out of the altcoin market due to a ‘black swan’ event such as a Russian default impacting the wider markets; and a specific risk being if Solana suffers another serious network outage which leaves not just users but partners looking to other layer 1 options for a low cost, high speed blockchain alternative to Ethereum,” Lian told Capital.com.

Despite recent bearish SOL token price action, algorithm-based forecasting service Wallet Investor gave a bullish SOL coin price prediction at the time of writing (20 April).
The site noted that SOL is “an awesome investment”, adding that it has a long-term earning potential of 576.24%.

For the end of 2028, the site projected a $387.31 SOL price target. Its long-term SOL future price prediction suggested that the cryptocurrency could have the potential to reach $523.61 by 2030.

Note that price predictions can be wrong. Forecasts shouldn’t be used as a substitute for your own research. Always conduct your own due diligence. And never invest or trade money you cannot afford to lose.