The NFT space continues to be impacted and feeling the heat even more. Coming into the third week of August, the global sales volume for NFT is around $639 million. With that, this could be the third consecutive month that NFT sales fall below the $1 billion mark.

The market is not all bad. According to Cryptoslam’s statistics, the leading collection is Bored Ape Yacht Club (BAYC), with sales of $2.5 million. Amid this downturn, BAYC managed to sell their “golden ape” at 777 ETH or around $1.5 million. Despite the high price, this golden ape has ranked only 320th in rarity according to the website Rarity Tools.

“I wanted to collect a golden monkey. 777eth is a suitable price. Yuga [Labs, the creator of BAYC] will be the first successful social [meta] verse,” said buyer and collector Vis.Eth in an interview with BAYC news outlet Bored Ape Gazette.

The other highlight would be on Bybit‘s NFT Marketplace. They have announced the launch of its brand-new specialized NFT portal GrabPic, where users can purchase state-of-the-art NFTs at attractive prices, with no gas fee, and trade for profit in the secondary market. With GrabPic, Bybit offers high-quality, exclusive NFT projects from crypto-native and traditional artists, GameFi projects, Metaverse projects, and many more.

Their first GrabPic listing is Zero to Hero. This is its very first NFT book collection offered to their users. This new NFT collection is created by Anndy Lian, a celebrated thought leader in the crypto and NFT community. 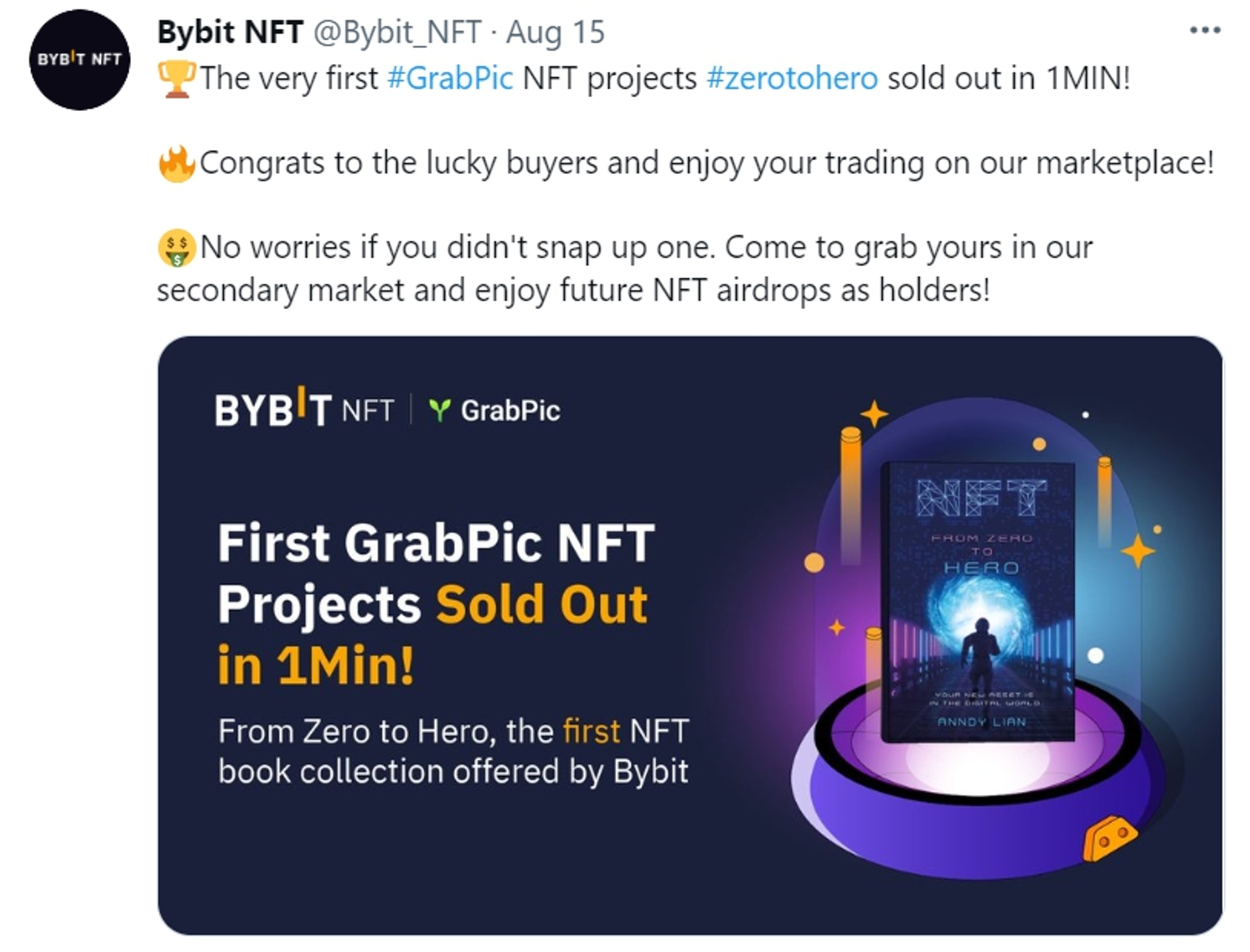 READ  Cardano (ADA) Price Prediction 2025-2030: What are the LAMBO chances on holding ADA?

The selling pricing at launch was 2.99 USDT. At one point, due to the demand, the floor price was pushed to 30 USDT. Then upon revealing the rarity of the NFT collection, one of the legends NFT reached 200 USDT, a 6,600% price rise.

“I am very grateful that my NFT book collection was all sold out. This gives a firm push for other creators to come forward to share their works and a confident booster for myself when I launch the book on Amazon next month. In my book, I have mentioned several times that the NFT space is still in its early days, and early adopters can be a “hero” in their search for new possibilities.” Anndy Lian, the book author of NFT: From Zero to Hero said.

The low price; high-quality strategy helps to bring more interest and brings life to the NFT marketplace on Bybit. Additionally, the marketplace will have a merge card function to be announced later in the month. Holders of previous GrabPic collections can get a chance to merge their NFT to receive more surprises. Anndy Lian also mentioned that he would be releasing an NFT music soundtrack with the book, and this will also be made available to the GrabPic users.  “GrabPic enables artists and creatives curious about the NFT space to enter with minimal technological barriers, and serves a niche audience through showcasing affordable and unique NFT art. GrabPic aims to democratize the NFT experience for those underserved by existing offerings on both the creator and the collector sides. We have many other projects lined up for our NFT marketplace. We will reveal them to all of you by batches.” Jenny Zheng, BD Lead, Bybit NFT Marketplace commented.

Looking beyond the crypto native markets, more companies are adding NFTs to their existing business. The cost of entry to the market is relatively lower and more transparent now. The outlook of the NFT market, in the long run, is still bullish.